The health of any democracy depends on informed and engaged citizens. This section discusses the trends and the research done to understand why young Canadians tend to vote less than older Canadians, and how civic education can help get more young Canadians to the polls.

For several decades, there was a downward trend in overall voter turnout. Before the 1990s, voter turnout was at 70% or higher in most federal elections. The voting rate declined in the years after that, and reached a record low of 59% in 2008. 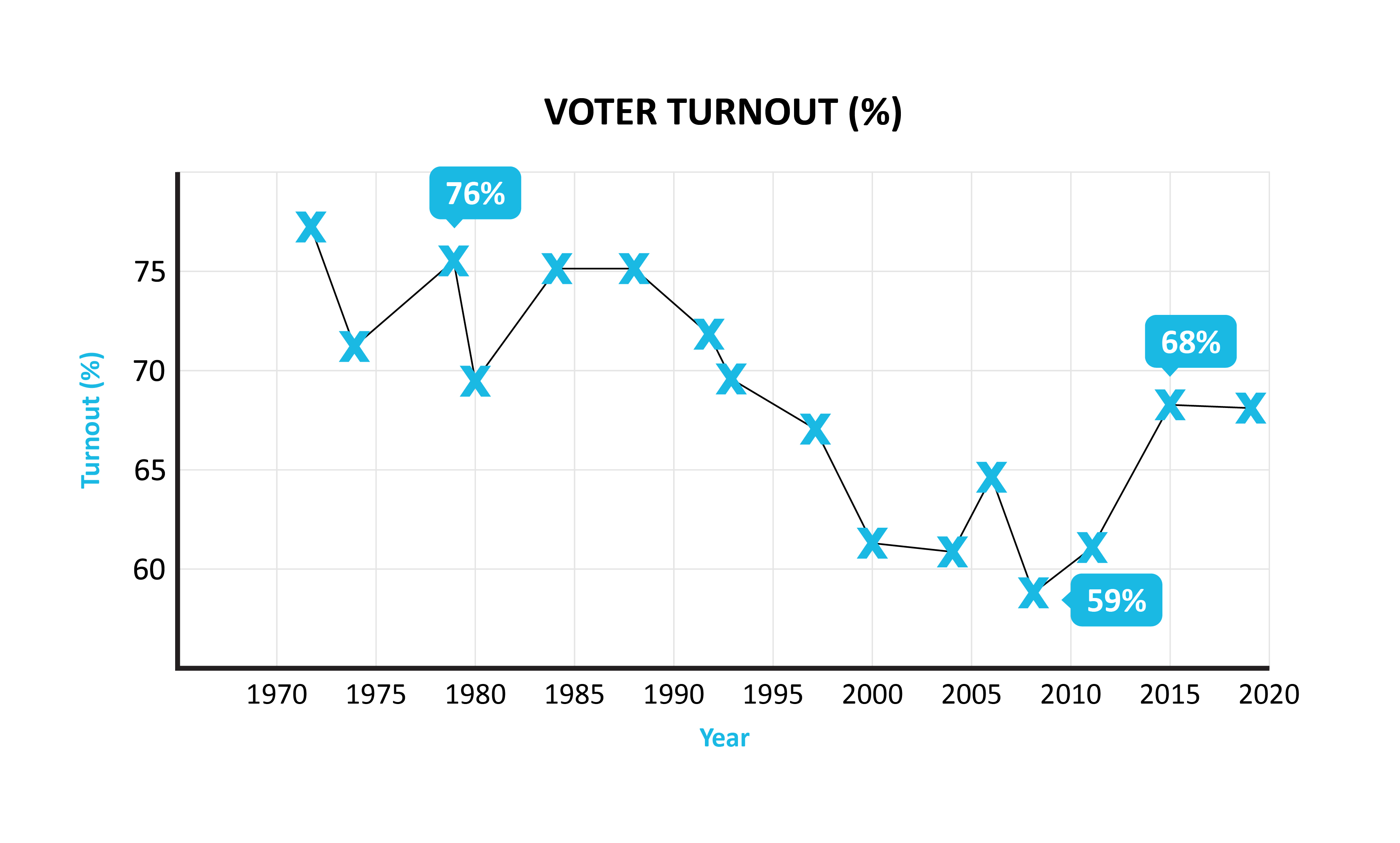 In 2015, voter turnout for youth (aged 18 to 24) increased the most of any age group: compared with 2011, over half a million more young Canadians voted.

But, in 2019, youth voter turnout decreased by 3.2 percentage points. Could it signal a downward shift in the trend? Or could it be a sign that participation is stabilizing?

One thing has remained true in the last decade: there is a significant turnout gap between younger and older demographics. In 2015, the turnout for young voters was more than 20 percentage points lower than that for people in the 65 to 74 age group.

In 2019, the gap between these age groups increased, with youth at 25 percentage points lower than the 65 to 74 age group.

Figure 2: Gap in voter turnout between younger and older demographics, 2019 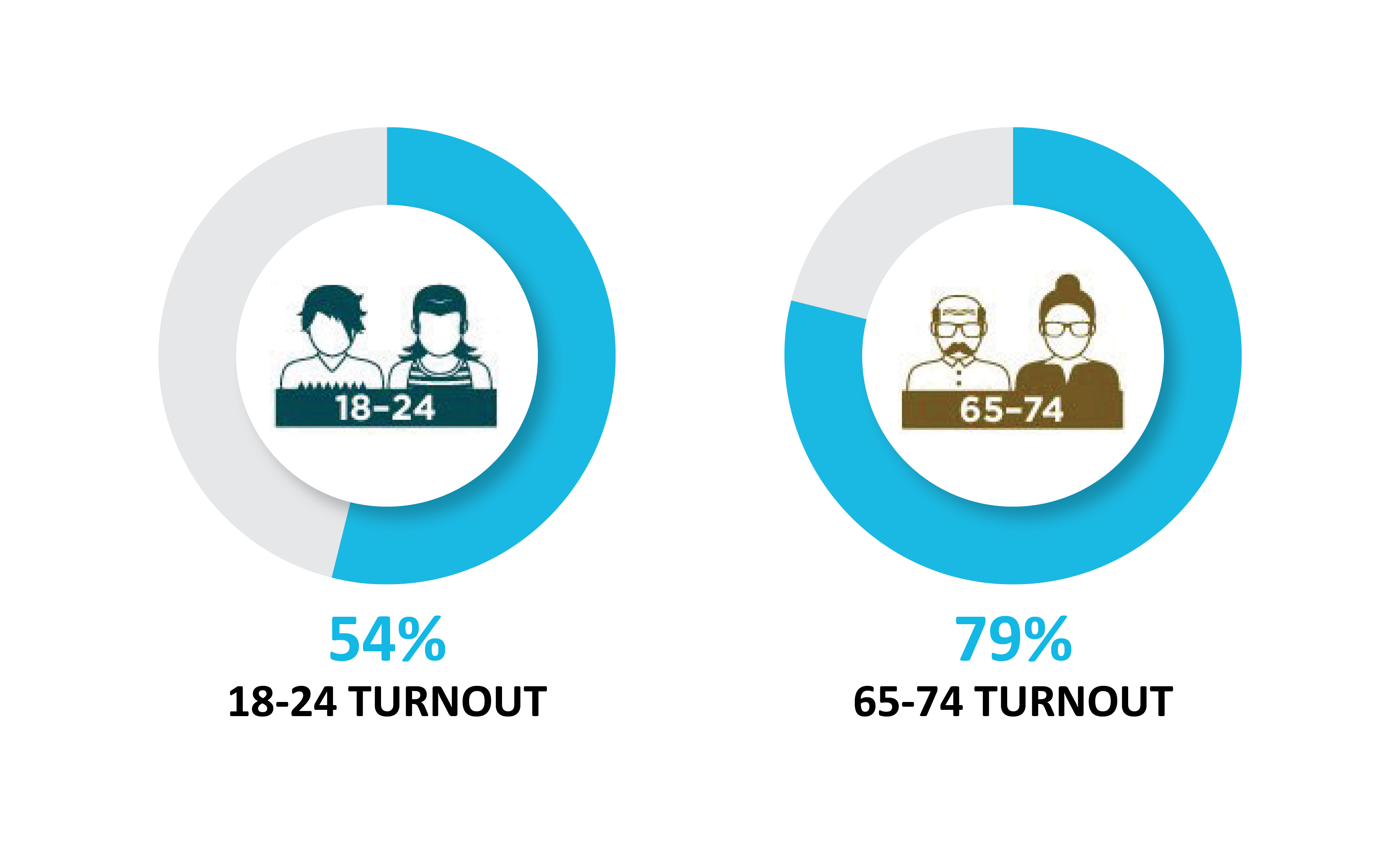 This graph represents the results of a study conducted with three cohorts of eligible voters between 1965 and 2011. 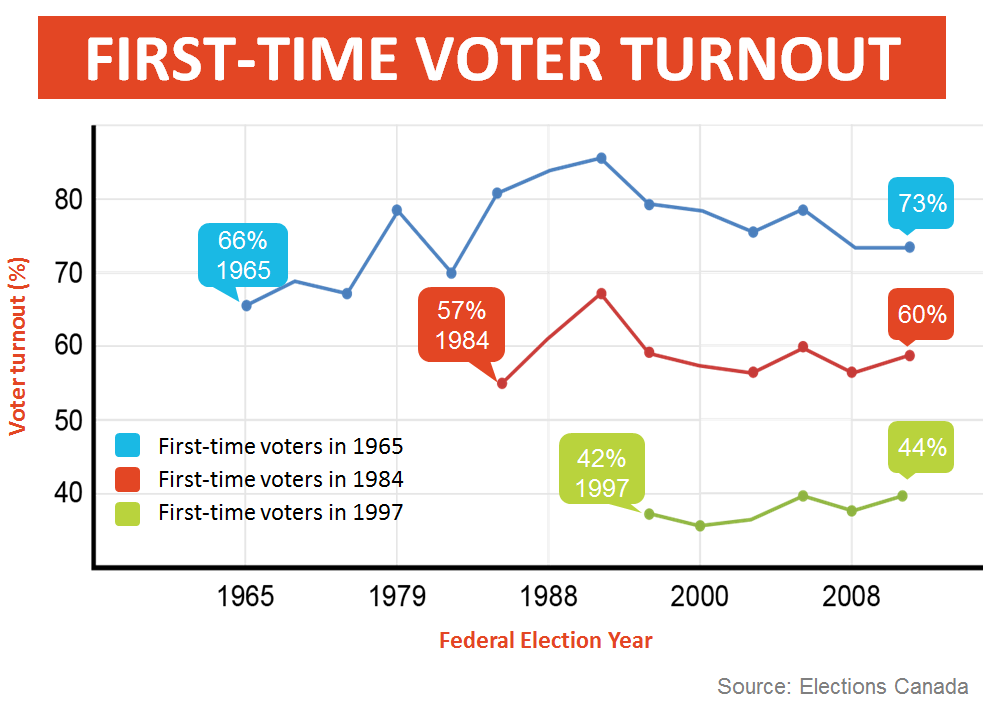 Why are fewer young people voting?

Elections Canada has commissioned several research studies to better understand why many young people are not showing up to the polls. This research is part of Elections Canada’s ongoing efforts to understand how barriers to voting are evolving.

From the 2015 National Youth Survey, the agency found two major barriers that prevented youth from voting: motivation and access. The survey found that compared to older voters, Canadian youth

The research suggests that a key factor in overcoming these barriers is increasing the interest level and political knowledge of future voters.

The Value of Civic Education

Given all this research, Elections Canada knows that when it comes to preparing future voters to take part in civic life, education matters. In the 2015 National Youth Survey, young people who voted were much more likely to say that

Creating future voters who are engaged and prepared to vote will require families, schools, government and others to work towards this goal. Our democracy depends on it!