The 1867 British North America Act allowed only men to vote.

Women formed groups in the 1870s to promote equality and fight for the right to vote by lobbying governments, marching and presenting petitions.

Different provinces had different rules for women and voting. The first success came in 1916, when Manitoba, Saskatchewan and Alberta gave women the vote. In 1917, some women were given the right to vote in the federal elections during the First World War. In 1918, gender was removed as a criterion for voting at the federal level, and many women got the right to fully participate in elections by casting a ballot and running as a candidate. However, some women continued to be barred from voting for reasons other than their gender. It was not until 1960 that First Nations women obtained the right to vote.

At Confederation, only men who are 21 or older and who own property are able to vote. Women are disqualified both federally and provincially.

The National Council of Women is formed to fight for women’s right to vote. Similar organizations spring up across Canada.

Prime Minister John A. Macdonald proposes expanding the right to vote in federal elections from ‘male persons’ to certain women.

Macdonald’s proposal is withdrawn due to opposition in Parliament.

Manitoba becomes the first province in Canada to grant some women the vote.

A year earlier, Manitoba women collected 40,000 names on a petition in favour of the cause. 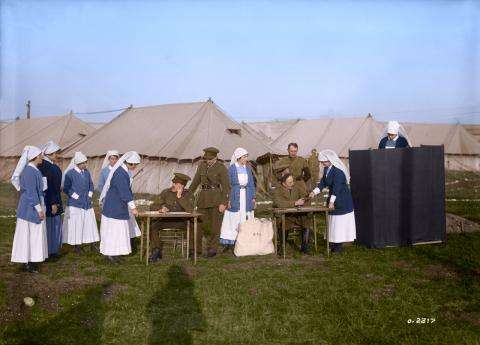 During the First World War, Canadian women in the armed forces and female relatives of military men are allowed to vote in federal elections. The Canadian military nurses in this photo were stationed in France when they cast their ballots.

Many Canadian women win the right to vote federally and, a year later, to stand as a candidate for the House of Commons. In 1921, Agnes Macphail is the first woman elected to the Canadian Parliament.

There was a lot of resistance to giving women voting rights in Quebec. It was the final province to do so. It took the efforts of activists like Thérèse Casgrain to bring about change.

All First Nations women (and men) are given the right to vote in federal elections without any conditions. Before this, they could vote only if they gave up their Treaty Rights and status. Here, Prime Minister John Diefenbaker greets a First Nations woman.