In 1867, the British North America Act was passed. The Act said that only men could vote. In the 1870s, women formed groups to fight for equality and the right to vote.

Different provinces had different rules about women and voting. In 1916, some women in Manitoba, Saskatchewan and Alberta won the right to vote in provincial elections. During the First World War, some women were allowed to vote at the federal level. In 1918, many women got the right to participate fully in federal elections.

However, some women were still not allowed to vote for reasons other than their gender. It was not until 1960 that First Nations women got the right to vote.

At Confederation, you can vote only if you

A group of women create the National Council of Women to fight for women’s right to vote. Women create similar organizations across Canada.

Manitoba becomes the first province in Canada to allow some women to vote. 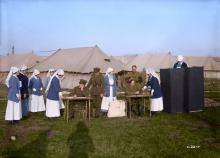 During the First World War, these women are allowed to vote in federal elections:

In this photo, Canadian military nurses in France cast their ballots.

Quebec is the last province to give women the vote. It took the work of activists like Thérèse Casgrain to make this change.

All First Nations women and men are given the right to vote in federal elections without any conditions. Before 1960, they could vote only if they gave up their treaty rights and First Nations status. Here, Prime Minister John Diefenbaker greets a First Nations woman.